Eleven artists working with the idea of spheres in motion will exhibit their work in the fun new
exhibit Bocce Balls and Other Human Propelled Spheres” at the Benicia Public Library. Artist Bodil Fox was inspired by the energy of the bocce ball games at the courts located next to the Library when she began playing the game a year ago. She decided to curate a show that would tap into this excitement. Artists living or exhibiting in Benicia working in metal, fiber, photography, glass, painting, ceramics, wood, concrete and kinetic art are creating artworks specifically for this exhibit.

The artists in this exciting exhibit are: 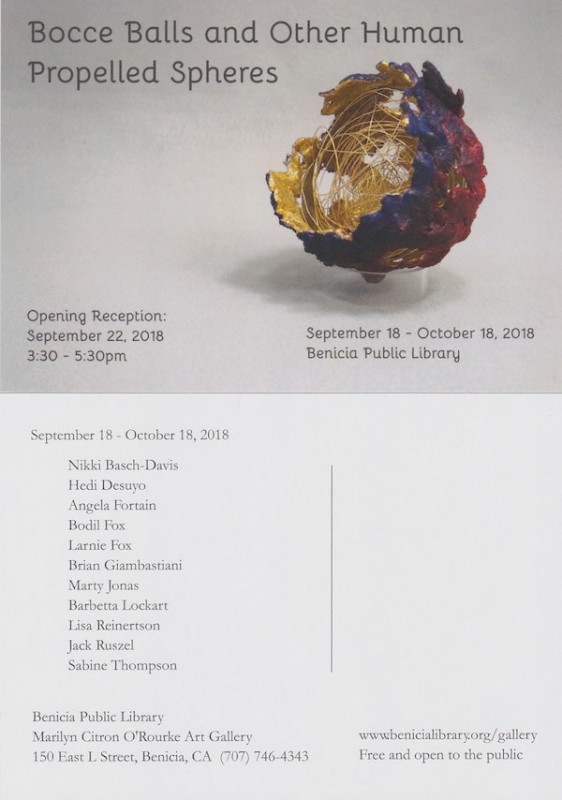 A great fundraising event is being held in conjunction with Loaves and Fishes. It's a fun event (lunch from New Mecca Cafe in Pittsburg, beer & wine) and a great Silent Auction with a wide variety of prizes. 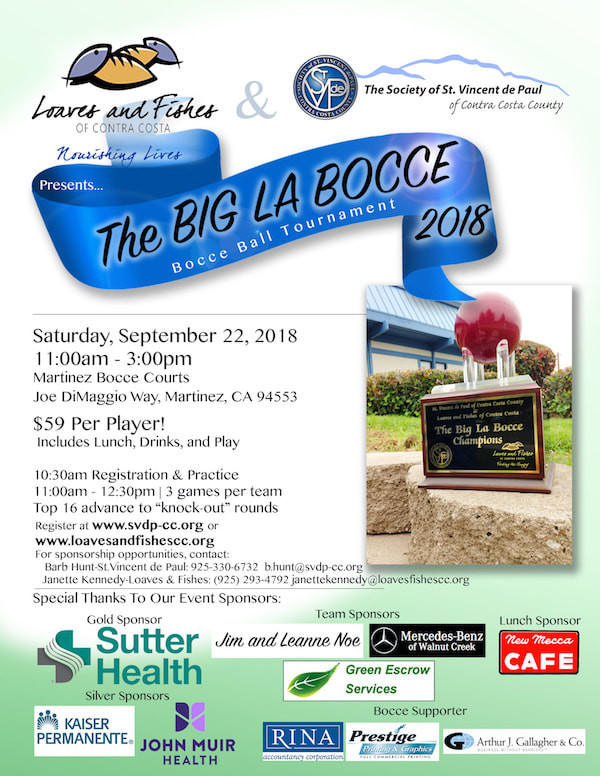 We closed out the regular season with a celebration of food, drink and bocce. Attendance was estimated at over 125 people. Several people came to find out about joining the league next year. From the full recycling bins at the end of the day, we have declared this inaugural event a success! With a little better promotion next year, we expect to double the fun. Thanks to all the volunteers who helped put on the event. We’d also like to recognize the folks at PG&E for their generous donation of $1,500 to the league to fund much of the cost of the event.

The regular season has come to a close. The standings have been calculated. And, the playoffs are ready to begin.

The Playoff schedule is now online, complete with which teams are playing and when. Check back regularly as playoffs matches complete and we fill out the bracket. And join us on the courts on Sept. 16 to watch the exciting conclusion to this year's season, as we crown our championship team.

If your team is in the playoffs, remember that you may be playing on a different night than you normally do.

The Benicia Bocce League will be hosting our first ever League Celebration at the bocce courts on Saturday September 8th from 4:00 pm - dark. Please note the new date!! (with our apology). The event is open to league and non-league members alike. Bring your family and friends. Meet players from the other divisions. Learn new bocce skills.

RSVPs are encouraged on our Facebook event page. Walk-ins welcome, too. We hope to see many of you there.

The Board of the Benicia Bocce League

p.s. We could use some volunteers to help with food and clinics. Email us at info@beniciabocce.org if you can assist.

The league sends out news and announcements via an email newsletter. Sign up now to stay in the loop.